Posted by Anthony at 17:53 2 comments: Links to this post

Posted by Anthony at 15:12 No comments: Links to this post

Posted by Anthony at 17:21 No comments: Links to this post

Posted by Anthony at 19:14 2 comments: Links to this post

The Phantom 5: They belong to all mankind.

King Arthur's sword, Excalibur; Roland's sword, Durandal; a model ark made from the wood of Noah's Ark; the asp that bit Cleopatra; Caesar's laurel crown; the diamond drinking cup of Alexander the Great; Hamlet written in Shakespeare's own handwriting; the great ring of Nebuchadnezzar; the necklace of Nefertiti; the lyre of Homer...

Just some of the amazing historical artifacts housed in The Phantom's "Major Treasure Room."

It's natural to wonder why The Ghost Who Walks is always so open to the idea of strangers visiting the Treasure Room. It seems as though he is putting the collection at risk, what with all the swindlers and thieves who have tried over the years to steal something.

Indeed, on this particular occasion, the dimwitted Professor, thanks to diligent research and a lot of luck, has unwittingly led the unscrupulous Captain right to the Skull Cave in the Deep Woods, and the Major Treasure Room. 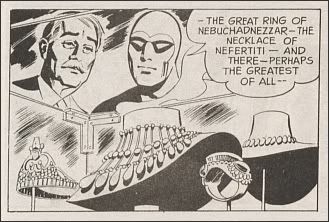 However, this story helps us to understand The Phantom's attitude. As he says to the Professor, he is the caretaker of the treasures, not the owner...

The Ghost Who Walks is happy for genuine visitors to view the collection. But, if you come with dishonourable intentions, you will come to a sticky end.

Posted by Anthony at 20:09 No comments: Links to this post

Posted by Anthony at 08:55 2 comments: Links to this post

Posted by Anthony at 14:16 No comments: Links to this post

The Phantom 4: Now I think I know what bravery is.

It's all very exciting when movie stars Rita and Cary arrive in town with their film crew, but they are not the only newcomers. Escaped convicts Slim and Shorty are hiding out till they can catch a ship to freedom, but, watching the fanfare surrounding Rita and Cary, they start to get bright ideas.

The film is to be shot on location in the jungle, and the director unwittingly hires the two desperadoes as guides. His more immediate problem is Hollywood super-star Cary, who, despite a he-man image, is a lily-livered fop.

Cary plays the strong and mysterious Jungle Man to Rita's shy Native Girl, but their big scene fighting off the bad guys goes awry when Slim and Shorty reveal their true colours, kidnapping Jungle Man and Native Girl for real.

Before taking Cary and Rita on horseback into deep jungle, Slim and Shorty demand a million dollars for each of them for their safe return. Two of Hollywood's top stars disappear into the jungle, leaving the director and film crew to find their way back to their vehicles and return to the town.

Slim and Shorty want to hide out for a week till the money is delivered, but they are unknowingly heading into cannibal and head-hunter country. Needless to say, news of these blundering travellers reaches The Phantom and he decides to enter the Badlands himself to help them.

The kidnappers find a place to hide out and set up camp by a lake. Shorty tries to force himself on Rita, and Cary tries to intervene but fails. As Cary backs off, Rita strikes Shorty, knocking him backwards into the water. Shorty is angry, but Slim tells him to leave her alone.

A band of cannibals has spotted the campfire smoke and prepares to attack the camp. At the same time, Cary has decided to wake up Rita and give the kidnappers the slip. Slim and Shorty are woken up as the cannibals make their move, but they are so busy shooting at the marauders, Cary and Rita get away.

The Phantom arrives in time to save Slim and Shorty. They lie to him about why they are there, but he is suspicious. He rides off for the cannibal village to make them understand that there is plenty of food in the jungle without having to eat people.

While all this has been happening, Rita and Cary have wandered around, trying to feed themselves. A lone cannibal has picked up their trail and figures on an easy meal for himself. A terrified Cary forces himself to stand up to the lone warrior, and Rita saves him by hitting the attacker with a rock. The cannibal retreats and brings back the rest of the scouting party. They capture Rita and Cary and march them back to the village to be eaten.

Luckily for them, The Ghost Who Walks is arriving in the village to warn the natives off cannibalism. As The Phantom escorts Rita and Cary safely back through the Badlands, they tell him the truth about Slim and Shorty and the kidnapping.

They stop to rest, and while Rita bathes, Cary confides in The Phantom. The three of them are being watched by a small party of head-hunters. The head-hunters have recognised The Ghost Who Walks but they make the decision to attack regardless.

A lone head-hunter has broken away from the party and discovered Rita. She tries to fight him off and screams for help. The Phantom commands Cary to go to her aid.

The Phantom, with help from a terrified Cary, defeats the head-hunters then ties them up with vines. The Phantom marches the bound warriors back to their village to boldly confront their king. Rita and Cary choose to accompany him and are amazed at his boldness and courage.

The Phantom, after one or two scuffles, lays down the law -- and the king, an old friend of The Ghost Who Walks, agrees to punish the group of troublemakers for their head-hunting ways.

Slim and Shorty are finally collared by the Bandar, but, before they can be carted out of the jungle by the authorities, they insult Cary and ridicule him. Cary demands satisfaction, and, in the presence of Rita and The Phantom, thrashes both of them.

Posted by Anthony at 13:30 No comments: Links to this post

Posted by Anthony at 18:10 No comments: Links to this post

Posted by Anthony at 08:09 No comments: Links to this post

The Phantom 3: That's the only real magic.

Back in the bad old days, you see, two great tribes were at war. And to keep the peace all those years ago, The Ghost Who Walks (the present-day Phantom's father) ordered a betrothal, a union between the five-year-old daughter of the Wambesi chief and the five-year-old son of the Llongo chief.

During the ensuing fifteen years, the times, like the young prince and princess, were a-changing. Lloni the boy is sent off to a modern agricultural college on the coast, and Wamba the girl sits around eating and increasing in girth, as befits the daughter of a wealthy chief.

The trouble with this is that, while Wamba remains attuned to the old ways, Lloni has had more than one kind of education, hanging out at nightclubs, growing more worldly, and changing his appreciation of what constitutes an attractive female form.

Lloni literally runs a mile from Wamba, and his refusal to marry her is an insult to the Wambesi, threatening the peace between the jungle tribes.

Now The Phantom is forced to become involved. His attitute towards arranged marriages seems to have softened considerably since the prince and princess were children, and that is because, unbeknown to the tribespeople, this is the son of the man who ordered the betrothal all those years ago.

Wamba, anxious to win Lloni's affections, is determined to become more like the nightclub singer he is infatuated with. To this end, she puts herself in The Phantom's hands and believes his legendary magic will alter her appearance for the better.
She is in for a shock, however. Under the strict supervision of Tagi the Llongo warrior, Wamba of the Wambesi is forced to change the hard way. There is no let-up and there is no escape. And, over time, she is transformed.

All are amazed by the new Wamba, not least of all Wamba herself. However, perhaps most impressed is the faithful Tagi the warrior, as he gazes admiringly at his handiwork.

P.S. - So Wamba succeeded in winning the heart of Lloni her betrothed, and they were wed after all? Of course not! Wamba was now the one refusing to marry the son of the Llongo chief, and, while Prince Lloni ran back to his nightclub singer, Princess Wamba of the Wambesi became engaged to Tagi the Head Warrior of the Llongo, so all was saved and peace was maintained in the Phantom's jungle realm!

Posted by Anthony at 16:14 3 comments: Links to this post

For The Phantom comics posts only, click on the label: phantom.

For snapshots of Dunedin posts only, click on the label: dunedin.

For Those Who Came In Late...

Anthony
Walk, hike, or tramp. Makes no difference. Along the road, through the streets, up into the hills. Lush, green, hilly, sunny, beautiful Dunedin. And on rainy days, there are always old Phantom comics to read.